Inspiring Stories From Our Tea Garden

A mission that supports women

Started in 2000, Teatulia’s own organic tea garden was a social enterprise designed to create jobs and opportunity—especially for women—in a remote and impoverished area of Bangladesh.

Teatulia is committed to making sure women have an empowered role in the Bangladeshi community where Teatulia’s teas are cultivated. To that end, Teatulia introduced a farming cooperative that helps improve the lives of the Bangladeshi community cultivating the teas through revolutionary education, health, and cattle-lending programs. Teatulia’s co-op programs that educate, train, and employ women in particular are extremely important to Teatulia’s Co-founder and CEO, Linda Appel Lipsius, who is also a working mother.

“Women get paid a fair wage directly [for working in Teatulia’s tea garden]; it doesn’t go through their husbands. Our tea garden is just a job. They get to go home at night and be with their families. A large part of the tea industry is not like that, with companies settling people in isolated work camps, separated from their communities. At a lot of them the conditions are shocking.” – Linda 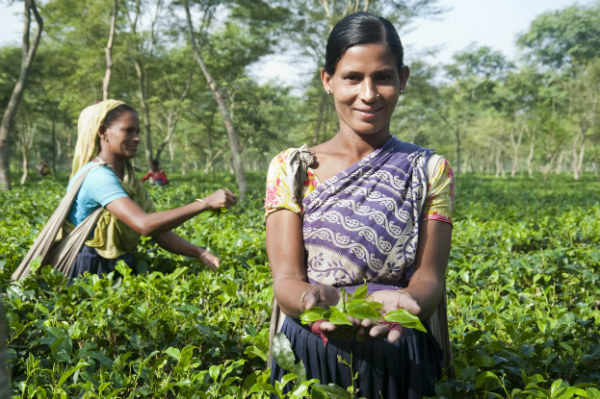 We're on a mission to end the cycle of poverty through:

Basic literacy and math education, so women are more employable, independent, and can confidently participate in the local economy without feeling like they might be cheated.

Preschool education for their own children, so they get a head start on the learning opportunities the women didn’t have until later in life.

Learning organic farming skills that help women feed their families, earn a profit on their crops, and take care of their land for future generations.

Participation in a cattle-lending program that “loans” milking cows to women, so they can earn a profit on milk they sell at the market and cow dung and compost (as a natural fertilizer) they sell back to the tea garden.

Teatulia’s 3,000-acre tea garden employs more than 600 women and supports 1,700+ community members through its farming co-op. The co-op’s programs have made a huge impact on the lives of the women (and their families) working in the tea garden and surrounding areas. 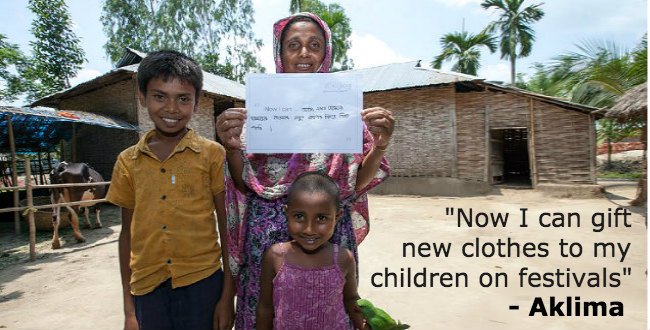 “[Teatulia] has not only helped create a thriving Bangladeshi tea company in one of the poorest parts of the world—but also brought literacy and math education to the workers.” – Specialty Food Association

The numbers are impressive, but most inspiring are the stories Bangladeshi women share with us about how their lives have changed after joining Teatulia’s co-op.

Banu worked in community farming and as a part time stone collector. In an effort to improve her family’s economic condition and escape from these low-paying and physically harmful jobs, she started working in the tea garden and joined Teatulia’s co-op, taking loan of a milking cow and calf. Today she is the proud owner of four cows and sells milk and cow dung back to the co-op to supplement her income. Because of her willingness to work and participate in the cattle-lending program, Banu was able to secure her own house where she lives with her husband, son, daughter-in-law, and two grandchildren.

“The co-op gives me guts to fight back. I started working with just 25 Taka wages per day, and now I earn 125 to 200 Taka daily. My target was to provide good food and balanced nutrition to my children. Now I am sending my grandchildren to school for their better future. If I a get chance, I will love to make a house for them too.” explains Banu (age 45), with confidence and hope in her eyes. 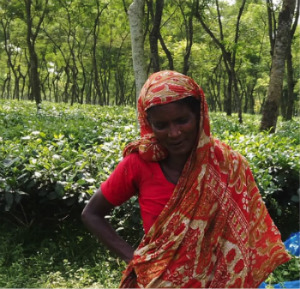 Azifa (age 50) was a mother of six children with no land to speak of and no real work or income to support her family. She managed a meager living by collecting stones daily with her children and selling them in her community; stone collecting is backbreaking work for adults much less for children. She dreamed of a better life for her family. In an effort to help her family escape the cycle of poverty, Azifa joined the Teatulia co-op in 2005. By taking advantage of the co-op’s programs, Azifa and her family have thrived.

Azifa now owns one-third acre of land with one small tea stall and six dairy cows that provide her with income. One of her sons now has a job after completing his high school education, and one of her daughters is next to attend school. She is proud that two of her daughters and one son are now married, and she hopes her younger daughter is next. She now dreams of continuing to build on her land to make room for her expanding family. 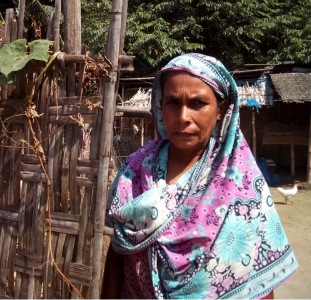 When her husband left her with a daughter, Mossammat Roshida Begum (age 55) had nothing. She started working as a farmer, but the income wasn’t enough to meet the most basic daily needs of her and her daughter. Sometimes they went to sleep unfed and hungry. Hoping for a better life for her daughter, she started working as a tea plucker in Teatulia’s tea garden in 2000.

After joining the tea garden, Mossammat Roshida Begum and her daughter saw tremendous life changes. They never slept hungry again, and over the years the mother surprised herself by earning enough money to build her very own house. The daughter grew up healthy and gave her mother three beautiful grandchildren.

“Now I have a dream to provide my grandchildren a proper education and to build a house for them with modern facilities,” beams this proud mother and grandmother. 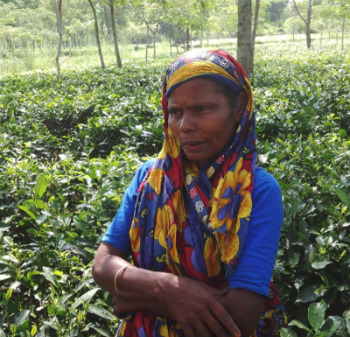 As a mother of two, Mosammat Rina believes that only education can lead her children to a better life. Worried she might not be able to enroll her children in any educational institutions due to her financial instability, Mosammat Rina joined Teatulia’s tea garden as a tea plucker in in 2001. Not only does the liveable wage she earns from the tea garden ensure that her children will be able to attend school, it also offers her family access to better health care and nutrition.

“My dream to send my children to school has finally come true!’’ exclaims Mosammat Rina. 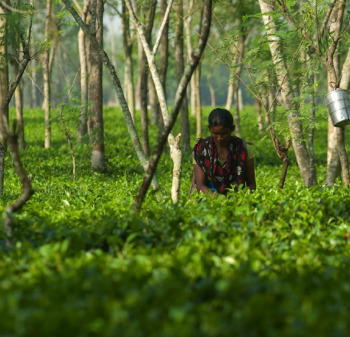