What is Green Tea?

It surprises many people new to tea to learn that green tea and black tea originate from the same exact plant species—Camellia sinensis.

It’s ultimately the variety of tea plant and how the tea leaves are processed that defines how green tea becomes “green” and black tea becomes “black”.

There are two principle varieties of the Camellia sinensis tea plant from which the tea we drink is produced.

This is a smaller-leafed variety native to China that is typically used to make green and white teas. It evolved as a shrub growing in sunny regions with drier, cooler climates. It has a high tolerance for cold and thrives in mountainous regions.

This is a larger-leafed variety first discovered in the Assam district of India and has typically been used to produce strong black teas. Its leaves grow large in warm, moist climates and it is very prolific in sub-tropical forests. 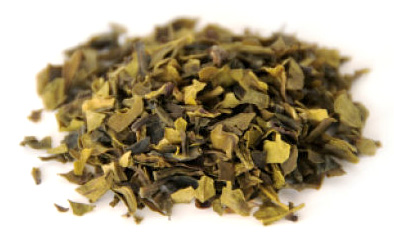 For green tea, the tea leaves are harvested from the Camellia sinensis plant and are then quickly heated—by pan firing or steaming—and dried to prevent too much oxidation from occurring that would turn the green leaves brown and alter their fresh-picked flavor.

A brewed green tea is typically green, yellow or light brown in color, and its flavor profile can range from grass-like and toasted (pan fired) to vegetal, sweet and seaweed-like (steamed). If brewed correctly, most green tea should be quite light in color and only mildly astringent.

By contrast, black tea leaves are harvested and allowed to fully oxidize before they are heat-processed and dried. During oxidation, oxygen interacts with the tea plant’s cell walls, turning the leaves the rich dark brown to black color that black tea is famous for, and significantly altering their flavor profile.

A brewed black tea can range in color from amber to red to dark brown, and its flavor profile can be anywhere from malty to fruity to roasted, depending on how it was processed. Black tea typically has more astringency and bitterness, but if brewed correctly it should be smooth and flavorful.

Our green tea is passed through a steaming treatment before rolling. Steaming applies light heat to the leaves to help halt the oxidation process before the leaves are rolled into shape. Steaming also helps expose the fresh, grassy flavor of the leaf. Green tea leaves are not allowed to oxidize after rolling, which is why they remain light color and flavor.

While all green tea originates from the same plant species, there are different types of green tea grown and produced all over the world today, including China, Japan, India, Sri Lanka, Taiwan, Bangladesh, New Zealand, Hawaii and even South Carolina.

Green tea, however, is considered to have originated in China. It is said that even today the word “tea” in China refers only to green tea, not to the general category of tea as it does in the West. China’s Yunnan province is considered to be the original home of the Camellia sinensis plant species. In fact, 260 of the world’s 380+ varieties of tea can be found in Yunnan.

One popular legend suggests that Shennong, Emporor of China and supposed inventor of Chinese medicine, discovered tea as a beverage around 2737 BC when fresh tea leaves from a nearby tea tree fell into his cup of just boiled water.

Others credit various Buddhists in the 500s BC and subsequent centuries for the discovery of tea. Buddhists would travel between India and China spreading their religion, culture and ritual of tea. Buddhist monks grew, harvested and produced tea much like their Catholic counterparts in European monasteries did with grapes and wine. The monks’ habit of tea drinking for physical refreshment, to aid meditation and as a substitute for alcohol developed into a spiritual and social practice that spread across China.

Green tea is claimed to have been popularized in Japan around 1190, when a Zen priest visiting and studying in China’s great Buddhist monasteries and temples returned to Japan with tea plant seeds and bushes. The young priest, called Eisai, used his experience growing and drinking tea in China to popularize the way of tea as a meditation ritual within his own community of Buddhist monks, eventually spreading the custom of tea drinking throughout the rest of Japan. To this day, China and Japan are the top two green tea producing and exporting countries in the world.

As you’ve no doubt noticed if you’ve sipped on several different types of green tea, not all green tea taste the same, even though it all comes from the same plant variety.

It depends not only on the processing method the tea producers use, but also on the cultivation practices the tea growers use. What time of year is the tea plucked? How is the plant pruned? What parts of the plant are plucked? Are the plants treated with chemicals or are they organically grown? What kind of heat is applied to the tea leaves to stop oxidation? How are the tea leaves shaped, rolled and dried? Are the leaves left whole or cut in smaller pieces?

A tea’s final flavor also depends on the “terroir” or environment the tea is grown in. Is it cool and mountainous or hot and tropical? Do the plants live next to limestone and pine trees or sand and seaweed? Do the tea plants grow near other crops that can affect their flavor, like rose bushes, coffee plants or grape vines?

The most popular, widely consumed types of green teas hail from the places where green tea originated: China and Japan. Green teas from China and Japan have different flavor profiles based on where and how they are grown, but most distinctively how they are processed—pan fired in China and steamed in Japan. Other countries producing green tea typically take cues from China or Japan and adopt one of these country’s tea production styles.

The Chinese style of green tea is characterized by pan firing, where tea leaves are heated in a basket, pan or mechanized rotating drum to halt the oxidation process.

Chinese green teas may be fired more than once during processing, depending on the style of tea being produced. These firings may take place in wicker baskets, steel wok-like pans, metal drums or other containers over charcoal, gas flame, electric heat or hot air, depending on the final flavor outcome desired.

The flavor can be altered greatly depending on the number and type of firings, but generally a pan fired Chinese green tea takes on a yellowish-green or dark green color and impart a grassy, earthy, roasted flavor.

The Japanese style of green tea is characterized by steaming, where tea leaves are treated briefly with steam heat within hours of plucking to both halt the oxidation process and bring out the rich green color of both the tea leaves and the final brewed tea.

The steaming process creates a unique flavor profile that can be described as sweet, vegetal or seaweed-like. Some Japanese green tea may also be shade grown during cultivation or roasted during processing, both to create additional flavor characteristics.

Some popular Japanese green teas include:

According to a Journal of Food Science test of caffeine levels across commercial brands of green tea, the caffeine content in each 8 oz. cup varied by brand from 11 mg to 47 mg, and other sources record green teas that can contain upwards of 60 mg per brewed cup.

If you’re looking for low caffeine content in your green tea, be sure and read the packaging carefully or ask your tea supplier directly for the caffeine information specific to the tea you are buying.

However, there are some common traits used to describe the overall flavor profile of the green tea category, including vegetal, grassy, earthy, sweet, buttery, nutty, toasty, seaweed-like, broth-y, lush, green and herbaceous.

Teatulia®’s green tea hails from our own USDA-certified organic garden in Bangladesh. We use the steaming method to process our green tea, so the tea stays bright green and fresh and has a grassy, vegetal flavor. To get a better idea of the flavor profile of Teatulia’s green tea, visit our green tea product page. 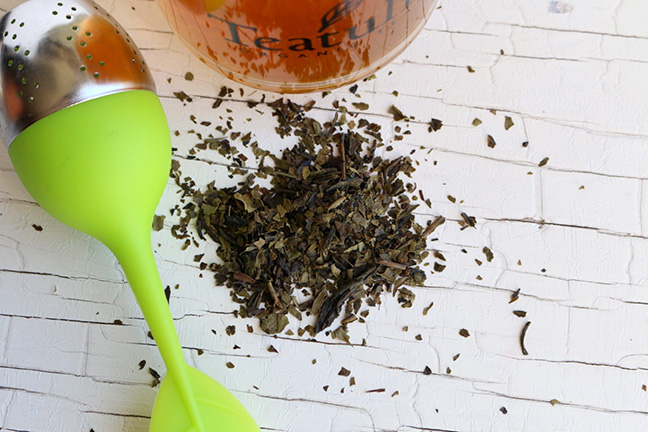 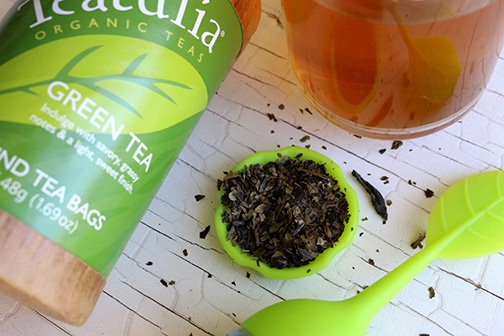 While tea won’t ever really go “bad”, it can get stale. And when tea gets stale, it’s not as nice to sip. So people who claim they don’t like green tea because they don’t like how it tastes have most likely sipped stale or low quality green tea.

To ensure you’re getting a green tea worth sipping, buy tea from a reputable company that can tell you when and how the tea was processed and packaged. And ask your tea purveyor for directions on how to brew the best cup of that particular variety of tea.

Since green tea is less oxidized than its black tea cousin, it is technically fresher and more delicate, so it should be consumed more quickly for maximum flavor. Green tea is best consumed within six months to a year of purchase. You should also take care to store your green tea in a cool, dark place, away from light, oxygen, moisture and fragrant pantry companions like coffee or spices.

For more information about how to best care for your tea, visit our How to Store Tea page.

Depending on the variety and type of green tea you’re planning to brew, each type may have different brewing temperature and steeping time instructions. Ask your tea vendor for brewing tips if the tea package does not have specific instructions.

Here are a few general tea brewing tips to keep in mind:

What are the health benefits of green tea?