What is Black Tea?

This is in contrast to Eastern culture—in countries like China and Japan—where tea typically refers to green tea. So what’s the difference between black and green tea? And how did black tea become so popular in the West? 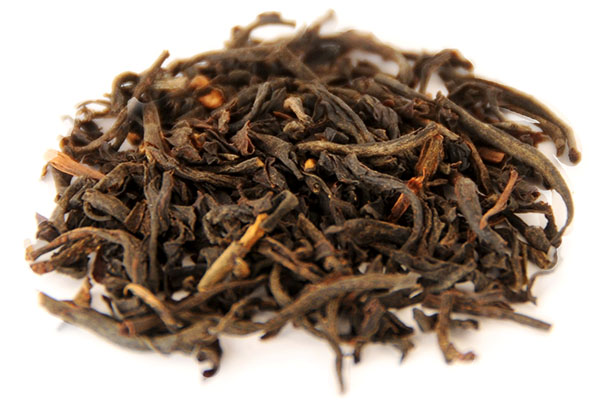 Tea is considered to have originated in China. But it’s the delicate, fresh-tasting green tea that became popular in Eastern society and is still the base of tea culture there today. As tea culture spread and tea was processed for export to trade beyond regions, neighboring countries and eventually across oceans, it was discovered that the more oxidized black tea would retain its freshness and flavor better over long journeys than its minimally oxidized green tea cousin. In the earliest days of border trade between China, Tibet and other neighboring countries, tea was fermented, dried and pressed into bricks to be used as currency. To this day, most of the black tea produced in China is exported out of the country.

The Dutch first brought tea to Europe in 1610, it arrived in England in 1658, and then it rose in popularity in England’s American colonies throughout the 1700s. Demand for tea experienced huge leaps in the 1700s as England expanded sugar imports from its Caribbean colonies. By 1800, the English were annually consuming 2½ pounds of tea and 17 pounds of sugar per capita. Some claim it was the increasing trend of adding sugar to tea that spiked the demand for strong black tea over the more delicate green tea imports.

The next leap in black tea production came in the 1800s when the Camellia sinensis assamica tea plant variety was discovered in 1823 in the Assam region of India. This native variety was much better suited to the production of the hearty, bold black teas that were in high demand. Not long after, in 1835, the English started planting tea gardens in India’s Darjeeling region, near Nepal. Since India was a British colony, these different varieties of black teas quickly became popular exports to England.

To understand what makes black tea black and green tea green, it’s important to know that all tea originates from the same exact plant—Camellia sinensis. It’s the variety of tea plant and how the plant’s leaves are processed that define if a tea becomes black or green.

Camellia sinensis assamica is a larger-leafed varietal of the tea plant that is typically used to produce black tea. Originating in the Assam district of India, it grows in warm, moist climates and is prolific in sub-tropical forests.

Camellia sinensis sinensis is a smaller-leafed variety native to China that is typically used to make green and white teas. It evolved as a shrub growing in sunny regions with drier, cooler climates. It thrives in mountainous regions because it has a high tolerance for cold.

What makes black tea different from green tea is that during the production process, the tea leaves are allowed to fully oxidize before they are heat-processed and dried. During oxidation, oxygen interacts with the tea plant’s cell walls to turn the leaves the rich dark brown to black color that black tea leaves are famous for. Oxidation alters the flavor profile of a black tea as well, helping add malty, fruity or even smoky notes, depending on the tea.

By contrast, when green tea leaves are processed, they are minimally oxidized. After being harvested, they are quickly heated and dried to prevent too much oxidation from occurring that would turn the green leaves brown and alter their fresh-picked flavor. Less oxidation means a green tea is typically lighter in color and flavor than black tea, with more vegetal, grassy or seaweed notes, depending on the tea.

Black teas are typically produced using one of two methods:

Our black tea is rolled immediately after withering to help get the oxidation processes started quickly. The leaves are then fully oxidized before they are dried, which is how they get their dark color and rich flavor.

For more information about the different types of tea processing, visit our “How is Tea Made?” page.

Black tea is grown and processed all over the world in varying geographies and climates. Three of the largest producers of black tea today are India, Sri Lanka and Africa. In fact, half of the world’s tea production comes from India. Some of the most popular styles of black tea coming out of these top-producing countries include:

India’s Assam region is the largest tea-growing region in the world. The rainy, tropical climate produces a tea known for its bold and malty characteristics that stand up well to milk and sugar.

Grown in a smaller, mountainous tea-producing region of India, Darjeeling is a softer, more herbaceous black tea that can change season to season with the climate. Darjeeling is often used as the tea base for India’s popular spiced beverage, Chai.

Much of Sri Lanka’s economy depends on its more than half a million acres of tea gardens that range in location from cool and mountainous to humid and tropical. Most of Sri Lanka’s tea export is black tea, known as Ceylon. Ceylon teas can vary depending on where they grow, but they are generally known to be strong and brisk with a hint of spice. (Sri Lanka is also known for its cinnamon production.)

Being a latecomer to tea production (early 1900s), Kenya learned fast and now leads Africa and the industry in the CTC style of tea production, producing and exporting mostly black tea. Kenyan tea is known for its assertive, full-bodied style.

While not a top-producing tea region of the world, the Tetulia region of Northern Bangladesh is home to (and namesake of) Teatulia®’s own USDA-certified organic tea garden. At nearly 2,000 acres, we’re proud that our tea garden is one of the largest of its kind in the world. We cultivate the Camellia sinensis assamica tea plant variety using natural farming methods that don’t harm the environment. And we use the orthodox method to process our black tea, so the fully oxidized leaf stays whole and brews into a fresh, sweet liquor with notes of apricot and honey. To learn more about Teatulia’s black tea, visit our black tea product page.

The Western palate has certainly become used to typical strong black tea that can stand up to sweetener and cream or lots of ice. So for a long time, the quality and variety of black tea wasn’t something that was highly regarded in the West. Mass production to meet the demand for tea was more important. But as consumers learn more about the world of tea, demand for premium, artisan, loose leaf teas are on the rise, and variety, freshness and flavor have become important distinguishing factors in choosing which black tea to sip.

When choosing a black tea to sip, remember that not all black teas taste the same. Just like with fine wine, there are so many variables that give individual black teas their own particular flavor profiles, including where it was grown, if it grew near other crops that affected its flavor (e.g. rose bushes or coffee plants), what kind of climate it grew in, if it was fertilized naturally or with chemicals, how long the leaves were allowed to oxidize when processed, what kind of heat treatment the leaves received to stop oxidization, and whether the leaves were left whole (orthodox) or cut into smaller pieces (non-orthodox) for packaging.

Generally, black tea is stronger, bolder and richer than green tea. A brewed black tea can range in color from amber to red to dark brown, and its flavor profile can range from savory to sweet, depending on how long it was oxidized and how it was it was heat processed. Black tea typically has more astringency and bitterness than green tea, but if brewed correctly it should be smooth and flavorful.

To get an idea of the specific flavor profile of Teatulia’s black tea, visit our black tea product page. 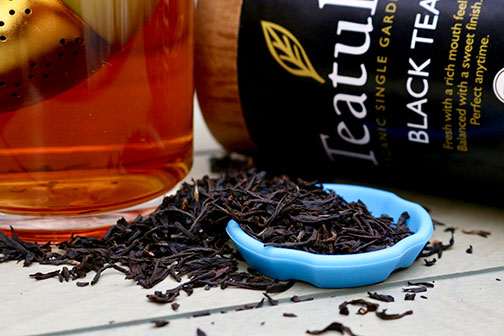 Between coffee, black tea and green tea, coffee generally has the most caffeine content per cup, then black tea, followed by green tea. But, like any beverage brewed from a caffeinated plant, there are a lot of factors that can determine caffeine levels in your cup of black tea, including how the plant was processed and how the beverage was brewed. Some generally accepted guidelines for caffeine content are:

To ensure you’re getting the freshest black tea you can sip, be sure and buy it from a reputable company that can tell you when and how the tea was processed and packaged.

While it won’t really go “bad”, tea can get stale if it sits around too long. Oxidized black tea is more shelf stable than its delicate green tea cousin. Many black teas can last up to one to two years if stored properly in a cool, dark place and in an opaque, airtight container away from light, moisture and pantry items like coffee and spices that can leach flavor into the tea leaves.

For more information about how to best care for your tea, visit our “How to Store Tea” page.

To brew the perfect cup of black tea, ask your tea vendor for brewing instructions specific to the tea you purchased, because many black teas have different ideal brewing temperatures and steeping times. Here are a few general black tea brewing tips to keep in mind: