Chai is steeped in a rich history. The name “chai” is actually the Hindi word for “tea”, which was derived from “cha”, the Chinese word for “tea”. In this case, the Hindi term chai means a mix of spices steeped into a tea-like beverage. Recipes for chai vary across continents, cultures, towns and families. But the traditional ingredients of a spiced tea blend usually include black tea mixed with strong spices, like cinnamon, cardamom, cloves, ginger and black peppercorns. The spiced tea mixture is typically brewed strong with milk and sweetened with sugar or honey. However, the milky sweet tea treat we order in coffee and tea shops today has very little in common with the origins of Indian chai. 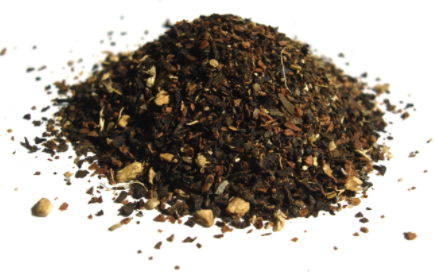 Legend has it that the origin of chai dates back more than 5,000 years, when a king in what is now India ordered a healing spiced beverage be created for use in Ayurveda, a traditional medicinal practice in which herbs and spices are used for healing. The heat from ginger and black pepper was believed to stimulate digestion; the antiseptic properties in cloves were thought to help relieve pain; cardamom was used as a mood elevator; cinnamon supported circulation and respiratory function; and star anise was known to freshen the breath.

As the healing beverage spread across India a wide variety of spices were used to prepare the drink, depending on the region of the continent or even the neighborhood where the beverage was being made.

Believe it or not, original versions of “masala chai”, or “spiced tea”, contained no actual Camellia sinensis tea leaves. Milk and sugar were also later additions to the famous drink. The addition of black tea leaves, milk and sugar were popularized thousands of years later (in the mid-1800s) when the Camellia sinensis assamica tea plant variety was discovered in India and cultivated by the British, who ruled continent at the time and had an insatiable desire for strong black tea with milk and sugar.

Since traditional chai beverages can vary from town-to-town and family-to-family, there is no one recipe that defines chai. But the beverage typically consists of these ingredient categories:

Tea: The Assam and Darjeeling black teas native to India are most popular to use as a chai base. But you’ll also find chai made with various types of green teas, the South American herb yerba mate or the South African herb red rooibos. You may also find completely herbal blends made only from spices and containing no tea leaves.

Sweetener: White sugar, brown sugar and honey are typical chai sweeteners, but other sugars, like demerara, turbinado or coconut, may also be used. Jaggery, an unrefined cane sugar, is a popular sweetener used in parts of India.

Milk: Indian chai is often made with buffalo milk. But the more Western version that we are used to is typically made with cow’s milk or dairy alternatives, like soy, almond, rice and coconut milks. You may also find yak or goat milk in other chai beverages around the world. Some recipes will have you steep a strong chai in water and then dilute it with milk. Other recipes have you simmer the chai spices in a mixture of water and milk or in all milk.

Spices: The spices, or “masala”, used in chai will vary by region, climate and cultural preference. Traditionally, cardamom, ginger, cloves, cinnamon and black peppercorns were dominant chai spices and all readily available in India. Vanilla, nutmeg, mace, star anise or fennel may also be seen in some traditional recipes. As chai moved west, bay leaf, allspice, cacao or saffron became popular additions. Coriander and cumin may also show up in some recipes.

The huge variation of chai recipes means the beverage can take on many different flavor directions depending on the ingredients used. Chai that’s heavy on the ginger and black peppercorns can leave a fire-y bite. Others containing more vanilla, cinnamon or nutmeg may leave behind a sweeter note. Those with saffron or cacao may impart some earthy bitterness. And those using fennel or cumin may have a more savory note.

As a nod to Teatulia®’s tea garden origins on the subcontinent of India, our Teatulia Chai Tea was created with the more classic, original Indian chai flavors in mind. With a blend of black tea, ginger, cloves, cardamom and cinnamon, our chai is a beautiful balance of smooth and spicy. The bold spiciness of ginger and strong sweetness of clove shine through, but the spices don’t overshadow our full-bodied black tea leaves. Our chai is just as lovely steeped in water alone as it is with the addition of your favorite milk or sugar. 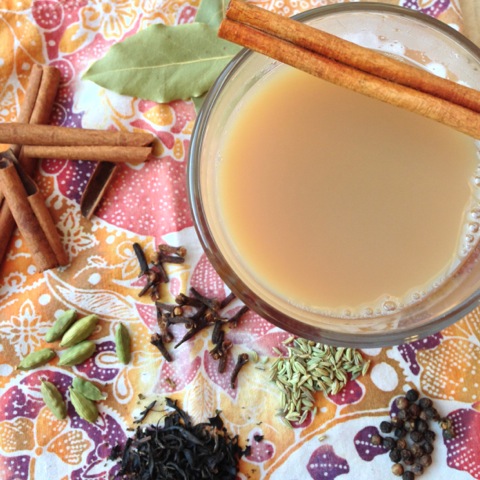 Teatulia Chai Tea contains black tea and so is similar in caffeine content to Teatulia Black Tea, which contains about half the caffeine than a cup of coffee. Ultimately, though, the caffeine content in any chai will vary depending on the amount of Camellia sinensis tea leaves the blend contains, where that tea plant was cultivated and how it was processed, and the way the chai was ultimately brewed for your cup.

Since chai blends may contain different tea bases and different teas can have varying ideal brewing temperatures and steeping times, always ask your tea vendor for specific brewing instructions for the chai you purchased. Here are some general chai brewing tips to keep in mind:

A chai blend, just like any other tea blend, won’t really go “bad”, but it can get stale. To ensure you’re getting the freshest chai, buy it from a reputable company that can tell you when and how the chai was processed and packaged. Chai tea blends can stay fresh for up to a year with these storage tips in mind: