Matcha is a high-grade green tea ground into powdered form. The green tea powder is whisked into hot water, instead of steeped, to form a frothy drink. The meditative act of preparing, presenting, and sipping matcha is the backbone of the Japanese tea ceremony. While matcha’s origins are ceremonial, the green tea powder is widely popular around the world in beverages like tea lattes or boba tea, and as a cooking ingredient in everything from ice cream to salad dressing.

Before there were teapots to steep tea leaves, early Chinese custom was to grind tea leaves into a powder then whip or beat the ground tea in a bowl with hot water.  While “beaten tea” was later abandoned by the Chinese in favor of steeped tea leaves, the Japanese went on to popularize the method. 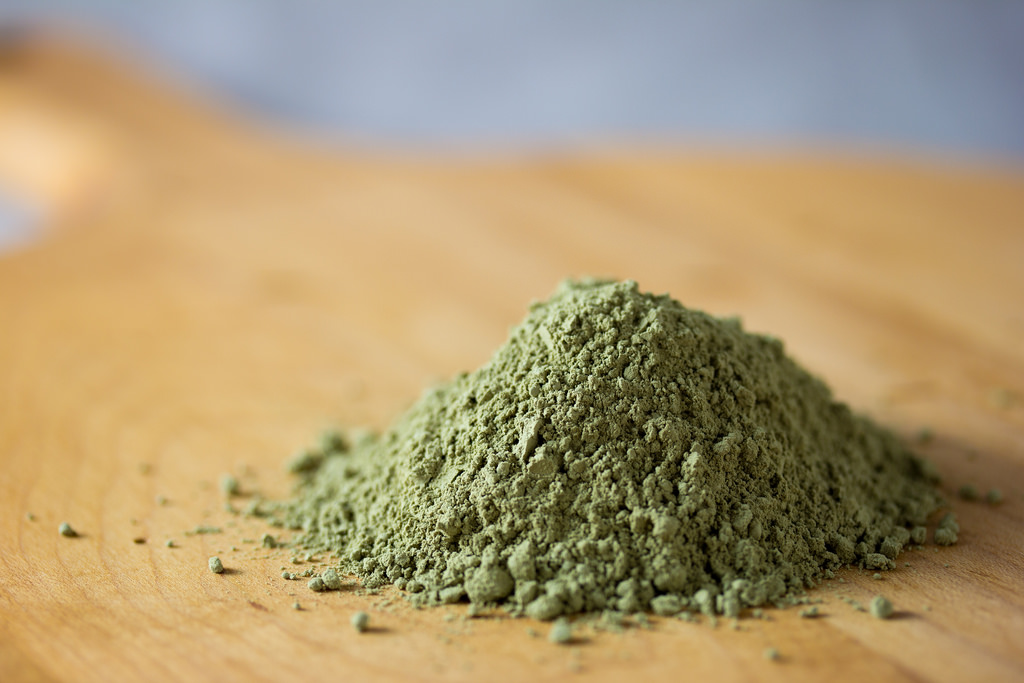 One of Japan’s own Zen priests studying in China’s Buddhist monasteries returned to Japan in the early 12th century with tea plant seeds and bushes. The young priest, called Eisai, used his experience in China growing and drinking “beaten tea” to popularize what he called “the way of tea” as a meditation ritual within his community of Japanese Buddhist monks. Eventually, he spread the tea drinking custom throughout the rest of Japan.

This ceremonial tea drinking was taken up with a fervor by Japan’s samurai class. The samurai were fearsome warriors yet cultured and high ranking members of Japanese caste society. The samurai identity was built on Zen Buddhism, practicing principles like discipline, ritual, and purification. It is said the samurai developed the Japanese tea ceremony into an art form and cultural tradition by adding hundreds of detailed steps to the practice, including specific hand movements, the proper design of the tea room, and instructions for how to sit and how to prepare and sip the tea. It is also said the tea ceremony was integral to samurai training, helping the warriors sharpen their focus, concentration, and patience in preparation for battle.

The Japanese tea ceremony, still called The Way of Tea, is a revered practice in Japan and is centered around the art of preparing and presenting matcha in an almost meditative fashion. It was originally developed as a spiritual practice and the principals of the practice—harmony, respect, purity, and tranquility—are still central to tea ceremony today.

How matcha is different

Matcha, like all true teas, comes from the leaves of the Camellia sinensis plant. How the tea leaves are cultivated and processed is completely different than any other tea.

Shade grown: All matcha is made from shade-grown tea leaves—a labor-intensive process where tea bushes are protected from the sun and light is filtered to the bushes in a very controlled manor. Shading boosts the chlorophyll production in the plant, giving the leaves a rich green color. The lack of sun reduces the plant’s photosynthesis of the leaves, which in turn alters the naturally occurring levels of caffeine, flavanols, sugars, antioxidants, and theanine. By controlling the sun exposure, tea producers can significantly alter the chemical make-up and flavor of the final tea leaves.

Seasonal: Only the newest spring buds and three leaves of the shade grown tea plants are hand-plucked for matcha production. Therefore, the window for production is very limited, which is one of the reasons matcha is one of the more expensive teas.

Steamed: Like most Japanese teas, the tea leaves destined for matcha are first steamed. The leaves are treated briefly with steam heat within hours of plucking to both halt the oxidation process and bring out the rich green color of the shade-grown tea leaves even more. The steaming process creates a unique flavor profile that is often described as sweet and vegetal.

Stone ground: Instead of being rolled, shaped, and dried like traditional green tea leaves, the leaves destined for matcha are laid flat to dry and become tencha, the leaves from which matcha is made. The tencha leaves are then stripped of their stems and veins. The remaining leaf material is ground in slow-turning stone mills, yielding a smooth green tea powder.

Consumption vs. extraction: Traditional tea leaves are steeped in hot water to extract of the flavor and chemical properties from the tea leaves into a brewed tea that is sipped. Matcha green tea powder, however, is whisked into hot water and the ground tea leaf material, suspended in the water, is consumed with each sip.

Matcha is grown in many regions across Japan, and each region and tea makers will produce slightly different flavor profiles and colors in the final ground green tea leaves.

Culinary grade: Culinary grade matcha has a more robust, astringent flavor that can stand up to other ingredients its paired with. It may include ground leaves that still had some stems and veins attached, it may be a slightly duller green than ceremonial grade, and it may often include a mix of matcha powder from several sources. Culinary grade can still be whisked into tea and sipped; in fact, it’s a great matcha to mix with milk for lattes or spirits for cocktails. It’s also a bit less expensive so it’s more affordable to stock as a cooking ingredient.

Matcha typically has more caffeine content than green tea, similar caffeine to black tea, and less caffeine than brewed coffee. Because matcha is produced from shade-grown tea bushes, the tea leaves tend to retain more of their caffeine content. In addition, since you’re consuming the ground tea leaf when sipping matcha, you’re ingesting more caffeine content than you would from the extraction of steeped green or black tea leaves. Like all drinks cultivated from caffeinated plants, however, a specific level of caffeine per cup of matcha tea will depend on the how the matcha was processed and prepared. Be sure and read the packaging carefully or ask your tea supplier directly for the caffeine information specific to the matcha you are buying.

Since matcha is whisked into hot water, there is a unique richness to matcha that the extraction of a traditionally brewed tea leaf does not produce. Some common traits used to describe the overall flavor and texture of matcha include: vegetal, sweet, rich, creamy, wheatgrass, slightly astringent, full-bodied, and frothy.

Matcha is best enjoyed as soon as possible after its production. Since matcha is a ground tea, any exposure to oxygen will immediately start to degrade the color and flavor of tea. If stored sealed in a cool, dark place it can stay fresh for several weeks and up to a few months (unlike dried tea leaves which can last for up to a year or two). To ensure you’re getting a fresh matcha worth sipping, buy it from a reputable company that can tell you when and how the tea was processed and packaged. Ask your tea purveyor for directions on how to brew the best cup of that particular variety of matcha.

Matcha is prepared differently from a typical brewed tea and is very easy to make if you have the right tools.

Step 2: Place 1/2 teaspoon matcha powder in a small bowl. Add a splash of the hot water and mix with a bamboo whisk to form a smooth paste.

Step 3: Add remaining water to bowl and stir with the bamboo whisk, flicking the whisk back and forth, until matcha is incorporated and you get a thin frothy foam on top.

No joke—this easy ice cream only has three ingredients!

Matcha green tea powder mixed with cream and sweetened condensed milk yields a creamy, dreamy ice cream that has almost a soft-serve texture to it. The fresh, grassy notes of the matcha balance out the sweetness of the condensed milk. It’s a rich ice cream, so a little goes a long way on a cone for a summertime treat or in a bowl for a classy dinner party dessert. 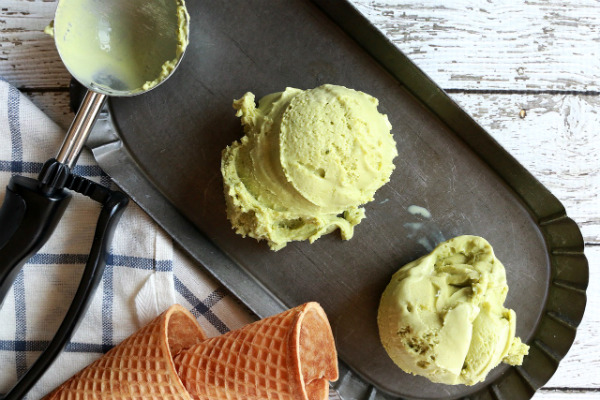 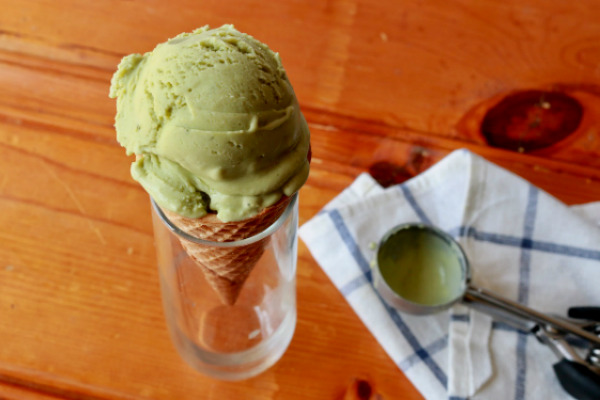 The Story of Tea: A Cultural History and Drinking Guide by Mary Lou Heiss and Robert J. Heiss, 2007