Next to water, tea is the most consumed beverage in the world. In the East, where tea was born, green tea is king. In the West, where tea has been eagerly adopted, black tea reigns supreme. In 2017, Americans alone consumed over 84 billion servings of tea—that’s more than 3.8 billion gallons! Almost 90 percent of that tea consumption consists of black tea, and about 80 percent of that is served as iced tea.

Is all this black tea good for us? You bet! Every day, new findings from the international scientific community lend credibility to tea’s healthy properties. While specific health claims around black tea continue to be researched, there are some indisputable benefits that make black tea great fit for anyone seeking a healthier lifestyle. 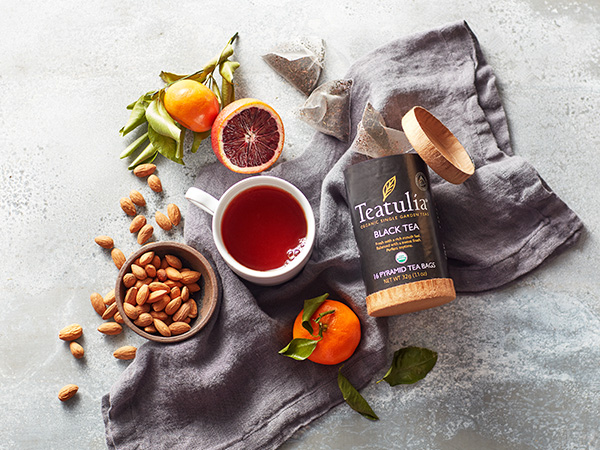 Ever walk up to a soda fountain craving a flavorful drink but cringing at the sugar-laden calories in the beverage choices? If you’re health conscious, you probably end up with a cup of water. Instead of walking away with boring water, fill up your cup with iced tea. You get the benefit of hydration (tea is 99 percent water) plus a satisfying boost of flavor (black tea is oxidized to coax out its naturally malty, sweet, or fruity flavor profile). Since tea is mostly water, it replaces much-needed fluid in our body; in fact, some experts suggest tea can and should count toward our daily eight cups of water intake.

Choose an unsweetened black tea and you get the bonus of a zero-calorie beverage. The School of Medicine at Mount Sinai Hospital suggests that substituting one to two cups of unsweetened tea for one can of soda can save 50,000 calories over the course of a year—that’s 15 pounds! In addition to being sugar-free, brewed black tea contains no sodium, fat, or carbonation.

A Kings College of London public health study offers another reason to choose iced tea over water at the soda fountain. Kings College reported that drinking tea can actually be better for you than drinking water. Tea replenishes fluid just like water. Plus, the natural caffeine in tea acts as a mild diuretic to help flush out the nasty toxins we accumulate in our daily lives. The best part though? Tea not only rehydrates and flushes as well as water, but it also contains powerful antioxidants that help prevent the cell damage from aging that leads to many health problems. It’s a win-win!

Why organic? If you truly are concerned about managing and fighting the toxins that build up in our bodies, drink organic tea. The first time tea leaves are washed is when they are brewed in your cup. That means any pesticides or chemicals sprayed on the tea plant can end up in your body when you ingest the brewed tea. Choosing an organic tea, cultivated only with natural farming practices, is one way to ensure you’re drinking a tea that’s good for your body—and the environment.

Swapping out coffee for a brisk black tea is an easy daily routine switch if you’re trying to cut down on caffeine. Black tea is still naturally caffeinated for that stimulating feeling, but it has about half the amount of caffeine than a cup of brewed coffee.

Not only does black tea have less caffeine than coffee but it is delivered in a more effective way. Tea is unique because it is the only plant that contains L-theanine, an amino acid that can cross the blood-brain barrier—which means it can alter our mood. In tea’s case, L-theanine acts as a stress reducer; it works in partnership with caffeine to stimulate and encourage alertness while at the same time producing serotonin and dopamine which release feelings of calm and relaxation. The result is a naturally sustained stimulation and ability to concentrate, instead of the jittery spikes and crashes that many experience with too much caffeine from coffee.

So when you reach for an organic black tea, know you’re choosing a healthy beverage that will hydrate and stimulate, satisfy your flavor cravings, and make your insides happy.