If one were to write a biography of green tea, it would begin with green tea’s birth as a medicinal beverage in China. It would continue to cover thousands of years of green tea’s healing uses in both traditional Chinese and Indian medicine. In its old age, green tea would now be considered the most researched tea in Western medicine.

While the specifics of green tea’s health claims continue to be researched and debated, it’s widely regarded as one of the world’s healthiest drinks. Here are some of the most common properties of green tea that can benefit anyone striving for a healthier lifestyle. 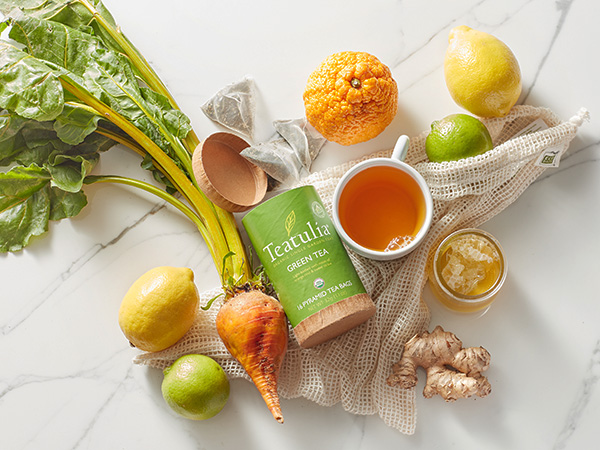 Polyphenols, flavonoids, catechins…oh my! When you hear these terms associated with green tea, what they refer to are the powerful antioxidant properties of green tea. Just as in other foods and plants, it’s the various antioxidants in the tea plant that contain the properties to fight the free radicals, or cell-damaging molecules, that are responsible for many health problems in our bodies. Because green tea is so minimally processed after the tea leaves are picked from the plant, the leaves retain much of their natural antioxidant properties. In fact, green tea is said to contain one of the highest amounts of antioxidants of any tea.

Trying to wean yourself off the caffeine buzz that coffee delivers? Try green tea. A cup of green tea generally contains about 75 percent less caffeine than a cup of brewed coffee. The naturally occurring caffeine in green tea provides a calm alertness versus the jittery stimulation many people experience after drinking coffee.

Takes the Edge Off

In green tea, low levels of caffeine work in synergy with L-theanine, a powerful amino acid found only in tea, to improve alertness yet induce calm. While caffeine stimulates, L-theanine “takes the edge off” with increased alpha brain wave activity, which promotes relaxation, helps reduce feelings of stress, and encourages restful sleep. In fact, Buddhist monks are said to drink green tea to help them stay alert yet relaxed during long periods of meditation practice.

A cup of green tea is 99% water, which is probably the healthiest thing we could ingest. Brewed green tea not only helps induce hydration, but sipping several cups throughout the day creates a sense of fullness. Green tea contains a phytonutrient called EGCG which helps to increase a hormone that promotes those feelings of fullness. If you’re watching what you eat, drinking green tea can help curb those snacking cravings.

Not all green tea is equally good for your body. Did you know the first time tea leaves are “washed” is when they are brewed in your tea cup? Choosing organic green tea means you don’t have to worry about ingesting the harmful synthetic pesticides and chemicals commonly sprayed on conventionally grown teas. Our Teatulia Green Tea comes straight from our organic tea garden in Northern Bangladesh, where we treat it with love, not pesticides.

Whether it's the amazing antioxidants, the naturally occurring caffeine, or the water used to brew it, organic green tea may help those who are trying to maintain a healthy lifestyle.