White tea is the unadulterated cousin to black and green tea. It’s known to be one of the most delicate and pure tea varieties because it is so minimally processed compared to the rest of its family. Less processing means white tea retains more of its natural plant properties that can be great for our health. While specific health claims continue to be researched and debated, white tea is gaining traction as an incredibly healthy drink, right up there with its more well-known cousin green tea.

If you’re striving for a healthier lifestyle, consider adding white tea to your daily routine for some of the following benefits. 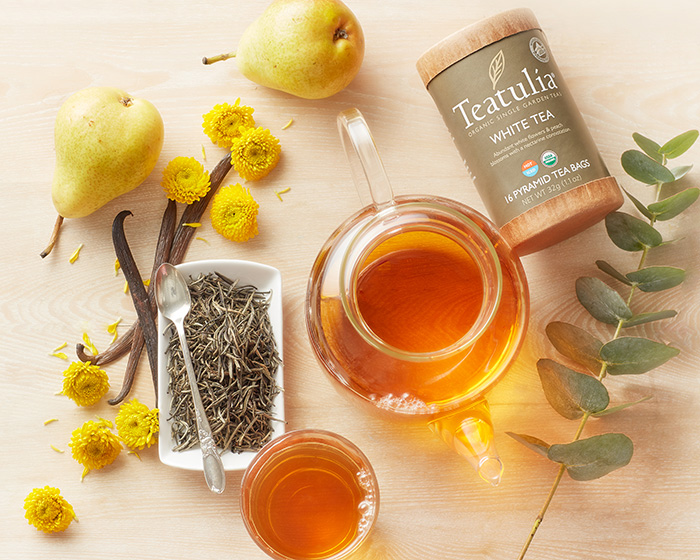 The Purest of Teas

While white, green, and black tea all comes from the same Camellia sinensis tea plant, it’s how the tea leaves are treated once they’re picked that determines their fate. White tea is simply picked and allowed to dry quickly and naturally. Green and black tea, on the contrary, are manipulated during processing to be exposed to various levels of oxygen. It’s the oxidation that begins to change their chemical make-up and flavor profiles. Because it’s not oxidized like its cousins, white tea retains its pure and fresh-picked flavor as well as so many of the powerful plant properties it was born with.

For the purest of pure, however, be sure and drink an organic white tea. Did you know the first time tea leaves are “washed” is when they are brewed in your tea cup? Brewing an organic white tea means you won’t have to worry about ingesting the harmful chemicals commonly sprayed on conventionally grown teas. We honor the purity of white tea by growing it organically in our organic tea garden in Northern Bangladesh, where we use only natural farming methods and absolutely no pesticides.

The tea plant, just like other plants and foods, contains powerful antioxidants known for fighting the free radicals, or cell-damaging molecules, that are responsible for many health problems in our bodies. Because white tea is barely processed, it holds on to these natural antioxidants more than its green and black tea cousins. In fact, it is said to contain the highest levels of antioxidants of any tea, including green tea.

Caffeine is a naturally occurring compound in all tea plants. Typically, the more oxygen exposure a tea receives during processing, the higher levels of caffeine it will end up with. Because white tea is not oxidized during processing, it’s commonly known to contain the least amount of caffeine. Teatulia® White Tea contains about 75 percent less caffeine than a cup of brewed coffee, so it’s a great alternative if you’re trying to kick the coffee habit.

Not only does white tea contain less caffeine than coffee (and many other teas), it delivers the caffeine in a unique way. Only the tea plant contains L-theanine, a powerful amino acid that works in tandem with caffeine to improve alertness yet induce calm. While low amounts of caffeine in white tea provides some stimulation, L-theanine promotes feelings of relaxation.

Tea is one of the healthiest things we could ingest. Why? Because it’s 99% water, which what our body needs to replenish fluids. Sipping several cups of white tea throughout the day not only hydrates, but it can also create a sense of fullness to help curb any snacking cravings. You can even throw white tea bags into a bottle of cold water for a refreshing cold brew. Teatulia founder Linda Appel-Lipsius says her favorite way to sip Teatulia White Tea is to let it steep in cold sparkling water—she calls it “Sparkle Tea!”

Whether you’re looking to add more plant power to your daily routine, reduce your caffeine intake, or just add a new and interesting tea to your healthy beverage arsenal, give white tea a try.

Benefits of White Tea vs Green Tea via Livestrong