Our CEO and Co-Founder, Linda, has set up her own vermi composting system at her home in Denver, CO to cut down on waste and revive the soil the way that nature intended. We asked her to share more about her vermiculture and love of worms.

How do you compost?

Because I live downtown, I do vermicompost. I don't have the space for a big compost bin or pile nor do I have that much garden to put it on. SO, I keep my kitchen scraps for the week - veggies & egg shells - then put them in the food processor w coffee grounds and some newspaper and break it down into little tiny bits so the worms can get at it. They aren't able to do much with whole pieces of anything. (My kids joke that I spend more time prepping the food for the worms than I do food for them.)

I have a worm bin that I bought online where the worms hang out and I keep them fed & moist.

Why did you set up your worm farm?

Over the last 10 years I have become increasingly aware of the critical role of soil health in our overall planetary health, both through my work at Teatula and the Permaculture Design Course I took last year. We utilize vermicompost at the garden and it literally turns organic waste into garden gold. The other part of it is that if we put our organic food scraps into the landfill, they will NOT decompose and give back to the earth as they were meant to, so it is important to keep food waste out of the landfill. On top of all of that, commercial composting is sadly not available to me where I live. SO, I figured I can start my own little compost facility in my downtown loft and do my own little part while super charging my rooftop garden.

What do you do with the composted soil?

I mix it in to the existing soil to enrich it. It is essentially worm poop, otherwise known as worm casings. AND I add the worms themselves to all of my little rooftop plots, pots and boxes.

What tips do you have for new vermicomposters?

Get over it. Worms are cool. Slimy but cool.

They create literal soil gold and the pleasure you'll get when you smell your bin for the first time after the worms have gotten to it - it smells like the forest - is really fundamentally magical.

You can make a worm bin by poking holes in a styrofoam cooler and adding all of the starter materials or you can buy one online. Doesn't really matter either way - only requirement is darkness and that they get air.

You'll need to experiment with their food. I've had my worms go kamazaki when I fed them something they didn't like - white, treated paper, pasta, citrus and anything greasy or fatty. And sometimes the stuff will spoil before the worms get to them, but that hasn't happened too often.

I keep my scraps in a closed, airtight container, ideally in the fridge or freezer.

Also need to keep the whole setup moist or the worms will dry out & die.

Keep them in a cool (not cold), dark place - I keep mine in the hallway to our garage behind our house. The temp there is constant and it is out of the way of my kids and dog who get grossed out by them and could accidentally knock them down. They do need constant care & feeding.

This is so simple. And so miraculous. Everyone should do it. 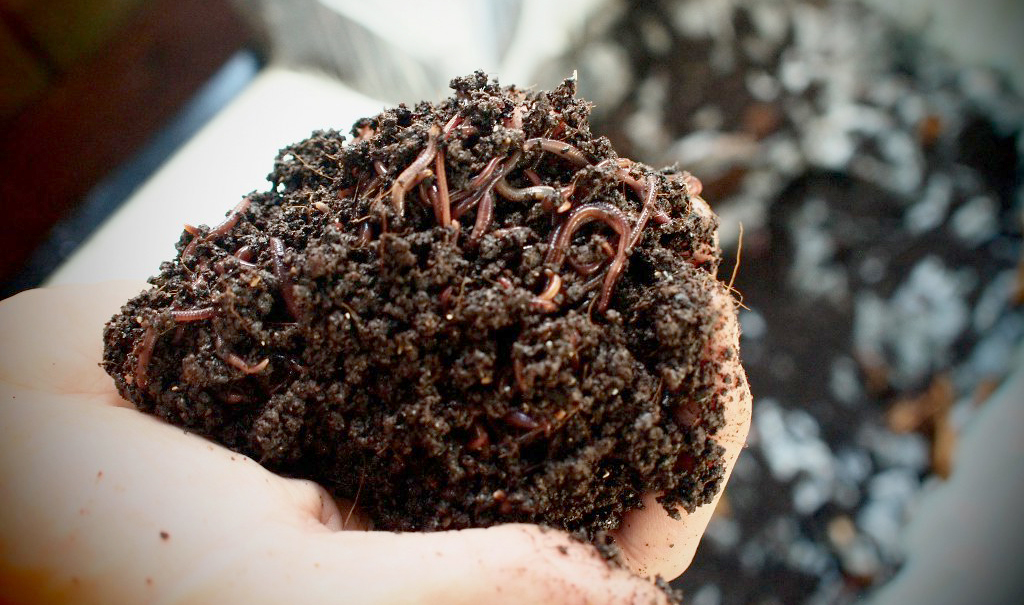